– Why did you decide to study in Russia?

– I specialise in Russian language and philology. All the students who learn Russian dream about going to Russia to study. I was no exception. I have many friends who graduated from Russian universities and returned to Vietnam where they have successful careers.

– How did you get into the university?

– I studied at Ho Chi Minh University and I was doing very well. Then I won a Vietnamese government scholarship and came to Russia. I studied in Moscow for a year and then I went to Tomsk.

– Why did you choose Tomsk?

– I had an acquaintance in Moscow who said that Tomsk was a beautiful city not unlike St Petersburg. That made me wonder, and I decided to try to study there.

– What were your first impressions of Tomsk?

– Everything was new, unusual and strange to me - not like at home, not like in Moscow. But then I saw that I was lucky because people in Tomsk were good. Tomsk State University teachers are very kind, always ready to help solve all problems I might face. Except the weather, of course (laughing). 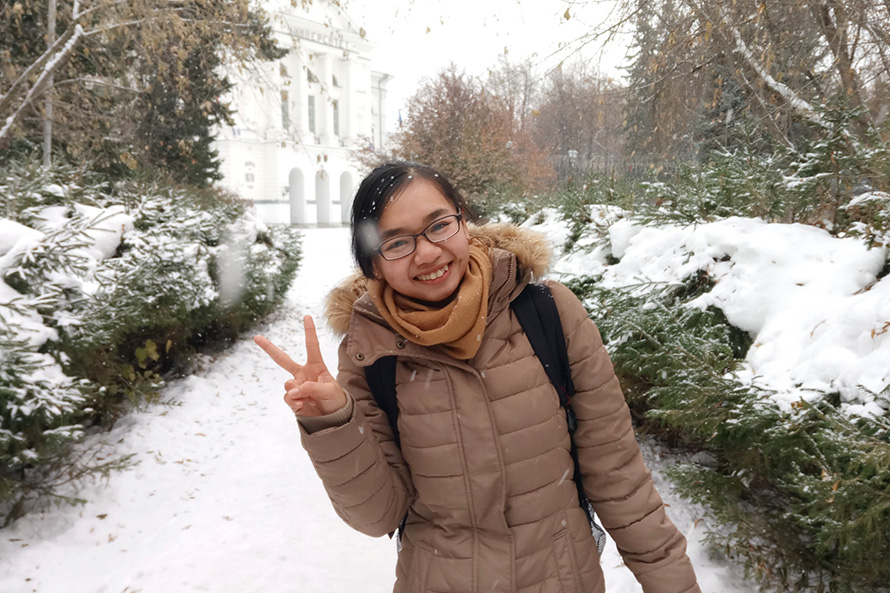 – How did you get used to the climate?

– As for me, the weather in Tomsk was terrible! I came there in November, it was frosty; the snow covered everything. But then I got used to it. TSU has good dormitories; it’s always comfortable there. When I went outside, I put on many clothes; it was warm inside the university or dormitory.

– Please tell about the dormitories.

– We had a three bedroom apartment. As I studied I shared the room with students from different countries such as Russia, Czech Republic, Italy and Indonesia.

– Did you get along?

– We did, I spoke Russian with Russians and English with the rest. Indonesians didn’t know the language well, so we used gestures a lot to communicate. It was an interesting experience.

– Did you make friends during your study?

– Yes, I have many friends, including Russians because I learn Russian and speaking Russian is interesting. Regrettably, we don’t communicate much now; everybody has their jobs and things to do....

– How did matters stand with food?

– I cooked my own meals; sometimes I went to a cafe to learn about Russian cuisine. I think Russian dishes are a must for all foreigners. I like soups best of all, like beetroot soup, and, of course, stewed cabbage with meat. 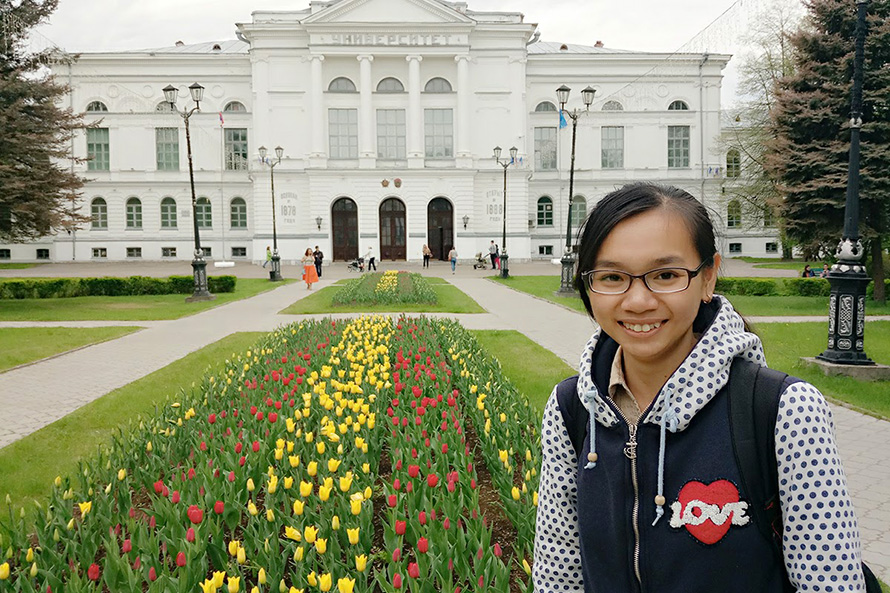 – Could you get the right ingredients to cook your native food?

– Yes, but it was not easy because in Vietnam, we use other products. Getting the right vegetables was a real problem. They mostly sell potatoes, opinions and carrots here, while we use more varieties of vegetables and greens. In Russia, I added cabbage to all dishes, though I hardly eat it at home.

– Did volunteers and university staff help you?

– When I came to Tomsk I had a personal volunteer. He showed me around, took me to a supermarket and a store where I could buy warm clothes, and explained how to properly prepare documents and extend my visa. Later on, I became a volunteer too helping Vietnamese students get their bearings and settle into life.

– What did you do in class?

– Philosophy was the first class I had; the lecture was in Russian. Frankly, I didn’t understand what the teacher was talking about (laughing). But I worked a lot, wend to the library every day and read books on philosophy and philology. Soon I began to understand my teachers well.

– Did you have a mentor?

– Yes, Galina Nikolayevna helped me a lot. In Vietnam, thesis preparation differs from how it is done in Russia, and paperwork differs, too. My mentor explained everything to me and coached me a lot; I’m grateful to her. Honestly, I miss her. 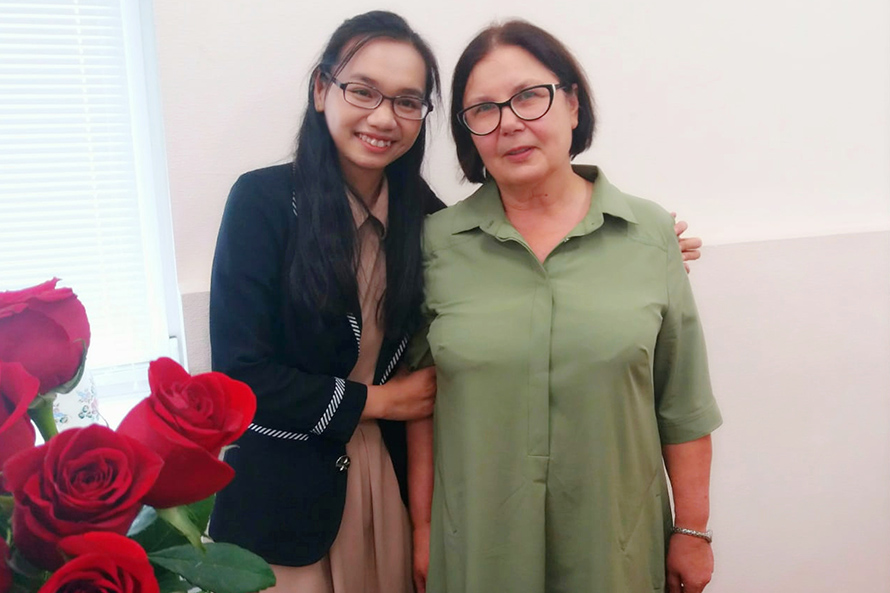 – Did the university hold any celebrations or festivals?

– The university often organised various events; I never missed one. Russia has many holidays, more than Vietnam; I like celebrating them. I wanted to learn more about Russian traditions and the ways Russians spend their free time.

– Did you travel in your free time?

– Yes, I visited Moscow, St Petersburg, Novosibirsk and Krasnoyarsk. I planned to go to Altai and Baikal for scenic views but I couldn’t spare the time for travel. I went to Vietnam once to see my family; not that I had left them for too long.

– What sights did you see in Tomsk?

– I liked to walk in the Camp Garden and in the grove by the University. The nature is beautiful there. There are many museums, though not as many as in Moscow or St Petersburg. I liked the Tomsk History Museum. I went to the Drama Theatre, the actors played well; it seemed to me they were more professional than actors in Vietnam.

Tomsk is a small city but it’s nice; I liked its atmosphere. It is clean and safe. I like Tomsk.

– What did you like best of all in Russia?

– I liked its good people who are really kind. I understood it as soon as I came here.

Once I could not find a bus stop. I asked a young man in the street to help; not only did he give directions but also showed me to the bus stop. Everybody was helpful, both city residents and university teachers. You might say they were like parents to me. They explain the material in class and took care of me, they asked me about living conditions at the dormitory and whether I had got used to the weather, if I wore warm clothes and whether I had a balanced diet. Actually, they really were like my Russian parents. 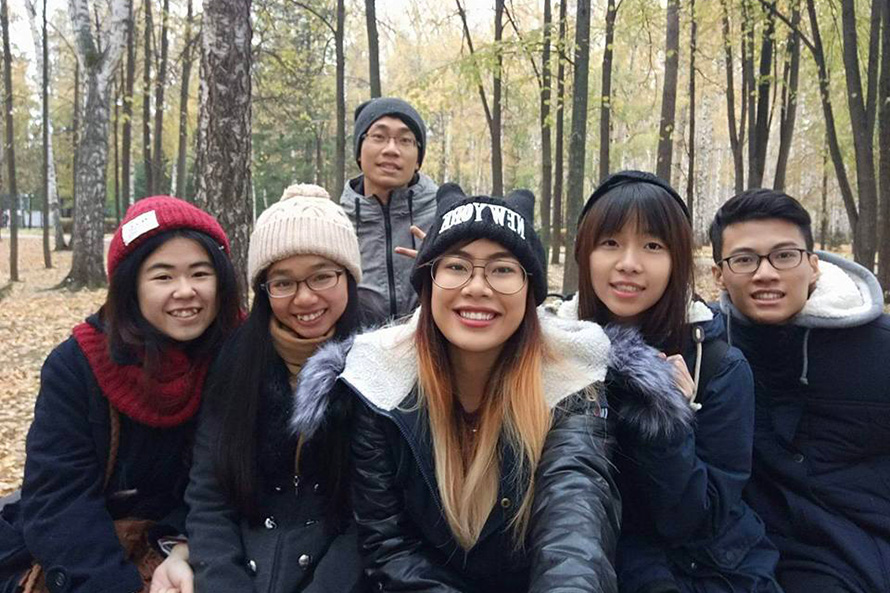 – The Siberian climate of course. It’s too cold in winter and too hot in summer. The weather is so changeable, I’d say it’s crazy. It’s warm in the morning, yet it can snow in the evening. But for the weather, everything is OK.

– You work at the university at present, don’t you?

– Yes, I teach Russian at the university. When I came back it was sort of unusual at first. I had got our of habit of living in Vietnam; I had got used to Russia (laughing). I remember my first class, I was surprised because students here are different, not like in Russia. The most unexpected thing was that although they and I spoke Russian we could not understand each other. Can you imagine it? It looked like we spoke different languages. It happened because when they speak Russian, they continue to think in Vietnamese, and stress the words the way they’re used to... I had sounded like that too until I began to live in Russia and understood the right way to speak. That is why studying at a Russian university is so important to us philologists.

– What advice can you give to prospective international students who think of studying in Russia?

– I can tell the students who specialise in Russian this: choose Moscow or Tomsk as your study abroad destination. In these cities, people speak standard Russian without the regional accent, that’s the way I hear it. In St Petersburg, the accent is different, people don’t seem to be mindful of the stress. By and large, the recommendation is as follows: if you want to study in Russia, you have to get into a university, and everything will be OK.